And Time Rolls On 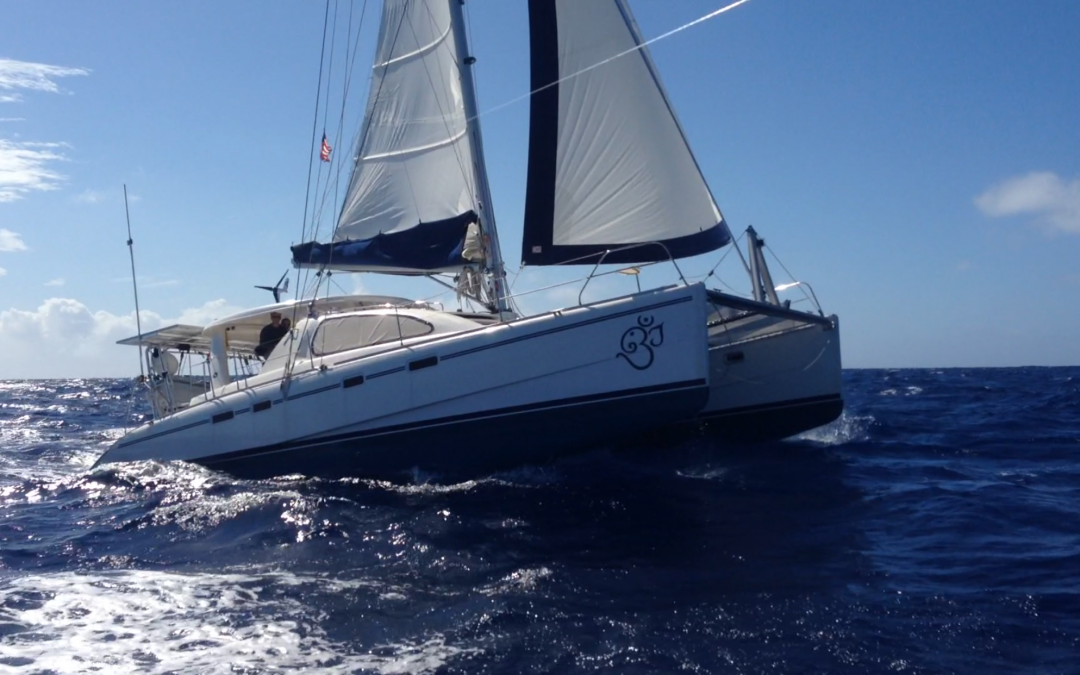 The islands have a way of just taking away your concept of time, until that time runs out.  Then its back to the rat race of America.  Like all things it happens in the now, like right now.  The last month of my island adventure was full of that, adventure and sailing.  Last we spoke I was sitting in the Acklins and waiting around in the calms for a wind to bring me back north a bit to Long Island.  Being a little impatient I decided one day to go out with the first winds we had and see what kind of a wind angle I could make.  After tacking 24 miles and making 2 towards my goal I was about to give up when I heard a BANG.  That is not the sort of sound one really wants to hear. 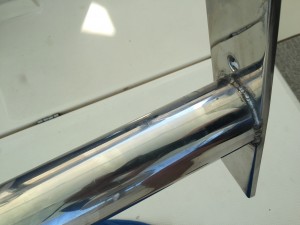 The compression post holding the hard top let loose at the weld.  Its one of those things on this boat, that until it broke I never really paid attention to.  It keeps the hard top from flexing as the traveler for the main is mounted on top.

So there ends my career of being able to sail everywhere.  A few days after the winds go in a better direction I motored the 87 miles up to Thompson Bay Long Island.  Thanks to having a local cell phone I was able to source out a TIG welder (one of two on the entire island) and had it fixed within 2 days of being back.

A few days later my friend Lale shows up for her birthday week and we are off for more adventures.  Long Island is a beautiful island and one that should be explored by car.  We drove most of the island in two days and saw many sights that I had not seen by water.  And we got to drive across the Tropic Of Cancer, the line of where warmth really begins.

From here we took a really beautiful 20 knot easterly wind and sailed up to Cat Island.

Cat is an island that is not much explored by cruisers as it does not have shelter from westerly winds.  We lucked out and had a few amazing days there.  From here we took off and had a lovely leisurely sail over to the Exumas and Staniel Cay.

Staniel cay is famous for many reasons, one of which is the Grotto which was used in a James Bond Flick- Thunderball.  There are also the swimming pigs, the Staniel Cay Yacht Club and all around just a beautiful spot.  Here is where Lale flew back to the states on a tiny plane which I think scared her a little bit.  The pilot was texting while flying.  Oh the Bahamas  ha ha. 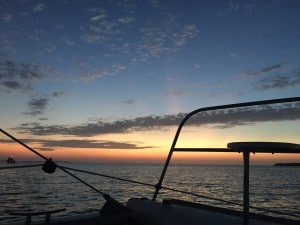 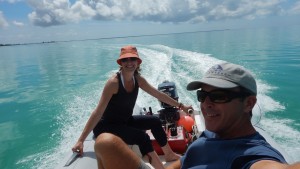 Never too young to learn how to drive the dinghy 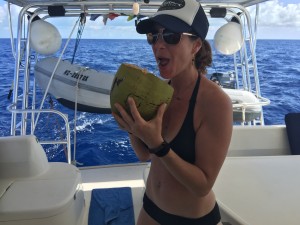 Put the Rum in the Coconut and shake it all up. Um fresh Coconuts 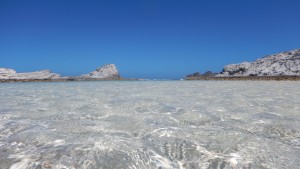 Possibly the sexiest Beach in the Bahamas, Staniel Cay 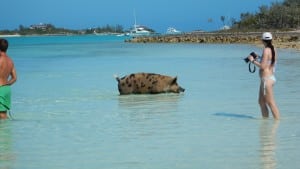 The Swimming Pigs of Big Majors 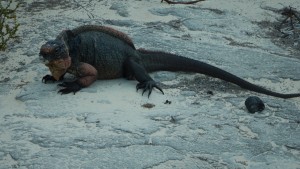 Iguanas of the Exumas 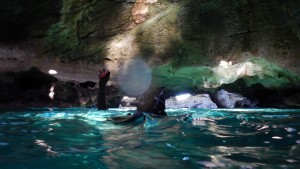 Interior of the Grotto 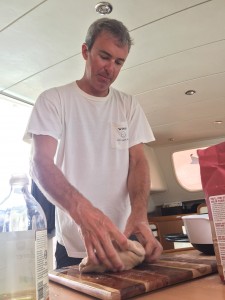 Yes, the captain can even bake bread…

Now that my time was very short, my sights were set on the good Ole USA.  Leaving shortly after Lale’s flight I had a wonderful downwind sail over to Andros.  This was new territory for me and it was exciting to see.  Though I had my doubts, later confirmed, that the anchorages were all rough.  Andros faces east and with our trade winds battering the coast line it takes a very specific weather pattern for it to be comfortable.

Lets just say that I did not arrive on such a date.  My first stop was Middle Cay which was only tended for overnight until I could leave.  I had to hide behind a tiny little cay from the onslaught of waves coming across the Tongue of the Ocean.  The next day with the rising sun I raised the sail and sailed off the anchor for Fresh Creek.  Here I was meeting up with a long time friend Doug.  This was a much better anchorage, with larger cays to hide behind.  This is the place that Ambrosia Cloth is made. Its a local cloth that is pretty famous for its patterns which you find most of the time as pillow cases and such.  We did a small tour of the place, which was pretty archaic in technology.  They still used fires to heat up the water in an attempt (not a good one) at setting the dyes in the cloth.  They get the job done though and it was nice to see some industry in the area.

The very next day Doug was headed off to the Exumas, and I decided to take the winds and head off for Fort Lauderdale.  Hauling anchor that evening at 8 pm I set off for Bimini and then to cross the stream to the big city.  What a comparison in lifestyles!  I must admit it was nice being back in the states, with all of its choices and a dock with unlimited fresh water.  The boat needed a washing. 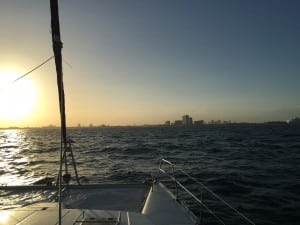 A horizon full of Apartments 15 miles out.. 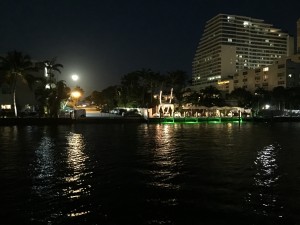 With a boat, the work is never done and it was that time of year to paint the bottom.  After taking a vacation from my vacation in Fort Lauderdale, catching up on some much needed yoga mat time, I sailed off for Rivera Beach to haul out at Cracker Boy Boat Works.  Let the fun begin of paying for all my play time.  Sand, paint, scrape, replace, and work my butt off to get out as quickly as possible.  It was a great experience with perfect 80 degree days and a very professional staff to take care of the supplies I needed to do the work. 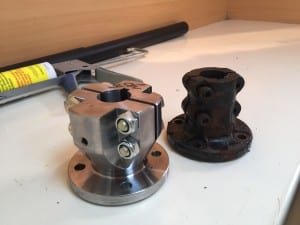 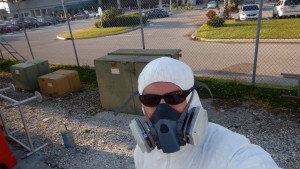 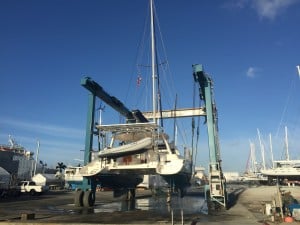 This just does not seem natural 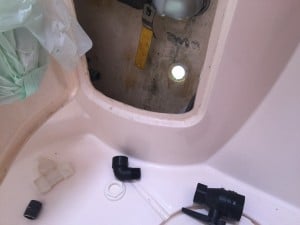 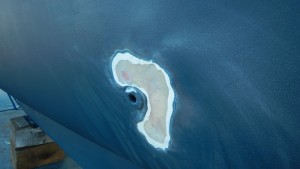 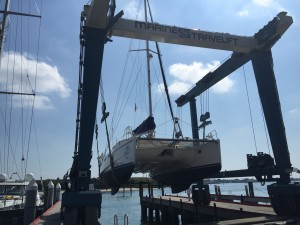 After 5 very intense days of hard work, Om was floating again and just in the nick of time. Literally I left that moment with one small stop to grab some fuel.  This was the first time since Charleston that I actually needed to grab some Diesel for OM.   In over 2000 miles my total use of Diesel was just 76 gallons.  That was a huge accomplishment of patience and being able to sail this boat everywhere.  Just proves that this really is a true “Sailing” Cat.

After 44 hours of some not so calm waters, Om motored back into Charleston Harbor.  It was a lovely sight to see Sullivan’s Island, Fort Sumter and the Battery. I do love sailing in the islands, but Charleston will always be my hOMe port.